Four young RAF cadets have today unveiled a quartet of aircraft commemorating one of the most poignant tales of wartime Britain.

The Aquila aircraft, carrying the names of three brothers who died in flying action, two during the Second World War, were unveiled at Tayside Aviation in Dundee which has held the exclusive contract for RAF Flying Scholarships for over 20 years. This MoD contract provides training to around 200 cadets each year, with cadets coming from all over the UK and Channel Islands.

All four aircraft will be used to teach RAF cadets to fly, many of whom will go on to become pilots or Officers in the RAF or Royal Navy.

The fourth plane carries the name of Sprit of Warrant Officer Donald Jeffs, who survived the crash of the memorial plane which the mother invested in as a tribute to her sons back in 1941.

The Stirling Bomber W7531 flew many missions but, on May 17th 1942, it was to be its last. The crew of eight, in good spirits, took off from England bound for Denmark to drop mines and small arms to the Danish resistance. After taking several hits, the pilot attempted to land in the sea but, instead, crashed into a forest near Midddlefart, Denmark. The sole survivor was radio operator, Flt Sgt Donald Jeffs. Badly burned and temporarily blinded, he was later imprisoned as a Prisoner of War until the end of the war. In 1948, the Danish people erected a memorial at the crash site using the large granite stone that was unearthed from the blast . To this day, a memorial service is held annually on Denmark’s Liberation Day, 4th May.

To provide a permanent tribute to the men, Jim Watt, Managing Director, Tayside Aviation decided to seek permission to carry the MacRobert Trust crest and names on the company’s aircraft. The G-TSDA, G-TSDB and G-TSDE aircraft have been named Spirit of Sir Alasdair, Spirit of Sir Iain and Spirit of Sir Rodric respectively. The forth Aquila aircraft has been named after the sole survivor of the crash, Sprit of Warrant Officer Donald Jeffs, who sadly died in 2017, at the age of 98. 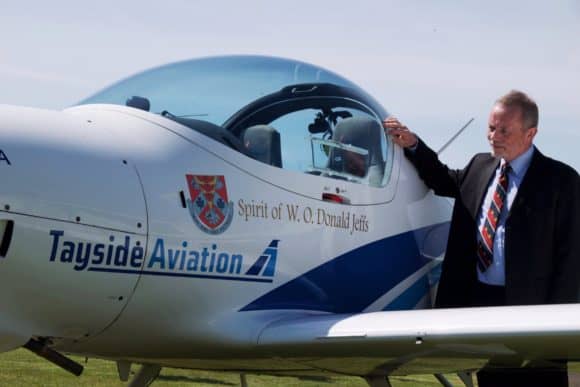 Mr Watt commented, “We are honoured and proud to be unveiling these four aircraft which tell an important story of selfless bravery, sacrifice and resilience, which we are keen to keep alive in the minds of today’s cadets. Lady MacRobert’s strength and determination have cemented a charitable legacy which we should all remember. Although the RAF has continued to carry the MacRobert Crest on a bomber, the names of the three sons have all but disappeared so we felt that it would be a fitting tribute, timed around the anniversary date of the crash and Danish Liberation Day.”

Having recently celebrated its 50th anniversary, Tayside Aviation is the only UK Flight School to fly RAF Flying Scholarships who undertake 12 hours of flying over a two week period to achieve their first solo flight. Tayside Aviation also delivers pilot training to students as far away as Hong Kong and has been training Chinese pilots for over 25 years. Tayside Aviation will also play a key role in the new Aviation Academy for Scotland, to be established in Dundee .